What I've been working on

Lots of little bitty pieces!!!! I couple months ago I found out that Bonnie Hunter was going to be in Kentucky about 1-2 hours south of me. A friend from my Senior Center had said to me that it was on her BUCKET list to go to a Bonnie Hunter class. So we did! Garden Party is the name of the quilt and let me tell you it is a LOT of little blocks.
http://quiltville.blogspot.com/2017/04/a-garden-party-kind-of-day.html   this will give   you an idea of it.

It looks like a lot of little pieces, but in actuality it is mostly strips! 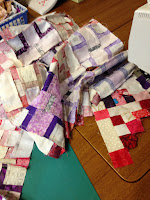 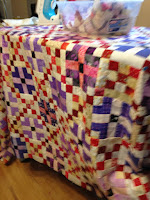 Still I can’t wait to get it done.

I have so many projects on the books! Patterns I want to make, Patterns I’ve bought! Many plans too little time!

I thought I had pictures to upload, but there seems to be a difference of Opinion from my Computer to my photos ON my computer!!!!! Had to edit from another computer.... curious! Photos on both computers!

Posted by Carolyn Sullivan at 6:42 AM No comments:

Finished En Provence For the Niece.

It took me months, but I finished En Provence. 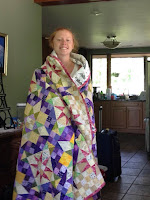 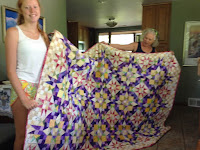 I think She liked it. I know her mom did!  I made the quilt longer and narrower so that it would fit a dorm bed. I hope it fits Anyway.It wraps around her well anyway. 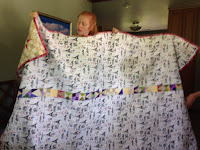 Posted by Carolyn Sullivan at 4:09 AM No comments:

It's been a long time since I posted on my blog! couldn't figure out how to get back on. I changed my email address and I don't think this one will let me get responses..... I will have to work on that.... Maybe open a new email address to link w my email...

I finished quite a few quilts since I posted last but there are no pictures on this computer to link with this post....

I finished Bonnie last mystery quilt and 3 queen sized quilts for my DD's I do want to post those, but will have to do it later.
Posted by Carolyn Sullivan at 12:05 PM No comments:

Finishing a UFO, and what I have learned about machine quilting 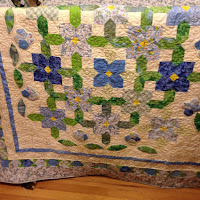 I had this UFO (Un Finished Object) on my shelf for awhile. It came from American Patchwork & Quilting, From June of 2009! I think I actually started on it that summer. It's called Summertime Blues, pattern by Jill Finley of Jilllily Studio you can see her page here: Jillily studio.

I didn't like the quilting the stitches were too erratic some tiny and some huge..... I was having a lot of trouble with the stitch regulator which was going bad. I had become quite attached to it.  Since then I have a Norton Fun Quilter 17. and mostly quilt w/o the stitch regulator. 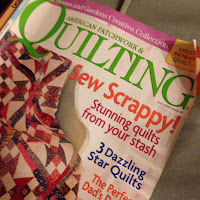 A couple yrs ago my mom helped me by taking out a lot of the stitches... it was very tedious.  I have learned a lot about quilting since I started this UFO, and now finished it. As I finished the binding I thought about what I had learned.

#1 don't keep doing something if it isn't right, stop and figure out what... otherwise you will have to rip out all those stitches. Which we did a lot of but I didn't remove all of them.

#2 I do pretty darn good w/o the stitch regulator. I requilted some parts of it, and also the background was free motion. 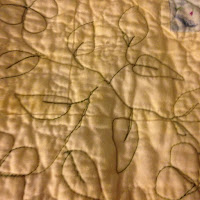 #3 pay attention to your tails. When I started a stopped on this originally I just did a few stitches in the same place. I didn't pull my thread up after doing a couple of back stitches. I had been taught to 'take some stitches in place' and cut the thread.... It leads to knots on the back of the quilt though.

#4 Pull your tails up and tuck them in as you go. I use this method you can view it here : burying threads, by K Grace Howe this is not the one I originally viewed, but it's the same method. There were a lot of tails on this UFO that I had to bury, and today I found another one.


#5 washing makes a lot of "errors" disappear. I don't wash my fabrics before quilting. One of the advantages for this quilt was that some of the upper green thread was showing through. most of that disappeared with washing.
I still haven't labeled my quilt. And I need to do that. 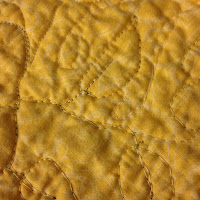 Posted by Carolyn Sullivan at 8:24 AM No comments:

I don't know how some you get so much accomplished! I have managed to get mine cut out and that is IT! 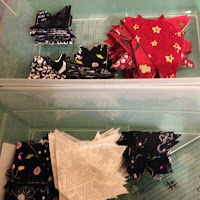 Friday I assembled the fabric, panicked because I couldn't find my blacks.... then found them. Finished a quilt for 2 of my DGDs... commissioned quilts I've been working on for the LONGEST time! TOO LONG. Glad they are finished and so are they!

Went to Pilates, came home to go to the grocery, and run around a bit with DH to see some Christmas stuff.
Saturday I insisted on at least CUTTING out all of my pieces. Then we went to several antique malls in the area. A LOT of driving to do all of that.... stopped in at a quilt store
and bought some fabric (1/2 price) for a future project. Then on to YET another antique mall. He did buy another Bridge Lamp. Got a great price on it. and I found some buttons for a friend of mine. Came home and threw some dinner together. Then proceeded to make 3 batches of cookies for when the grands come over TODAY to bake cookies!

DH has a special kind of bar cookies he likes (they are OK) But I was really tired by that time and while reading the recipe I read 2 tsp of salt.... no it was 1/8 tsp of salt, and 2 tsp of cinnamon!!!! I tasted the dough after they were in the oven as I was cleaning up.... YUCK! he is trying to save them. He hates to waste anything.

I promised to make him another batch.

Here's a link to some Featherweights from a previous post that I need to sell. I have too big of a herd. They have been sewn with by me after cleaning and updating small repairs. Scrollwork-Featherweights for sale

Having trouble getting signed in.... so I never updated my blog since Oct!!!!
Didn't do anything with the mystery quilt that Bonnie Hunter is doing. But I'm ready to start clue 3 today. 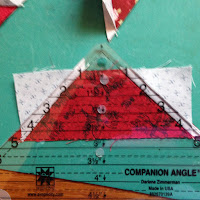 As you can see I did ALL 80 of the santa hats WRONG, I cut the triangle too big, and had to rip, cut down and resew! It took me another whole day to catch up!


Now I'm on to the third Clue, done a lot of cutting. A lot of Christmas activities too. SO AGAIN, I am behind.
and to top it all off we are having spring like temps! I really want to go outside for a walk or something!

For clue 3 I decided to cut all my 3.5 X 7.5 pieces first out of strips, then cut my 2" strips from the remaining neutrals. I think it went well.
Posted by Carolyn Sullivan at 8:42 AM 1 comment:

Again I have accumulated a few Featherweights that I want to sell! I try to pick up some ever so often and do the repairs, get them sewing well and resell them. However I've had these for almost a yr, and have not gotten around to fixing them up, until recently. I'd like to get $325 plus shipping, and I take Paypal of course.

First off I have a cute little 1938 with a serial number of AE990039. I've replaced the feet, oil pan felt, and cleaned her up... she purrs when she sews! Her stitching is as good as when she was bought.

The box for the 1937 is in really good shape, handle, locks, no keys though.

Posted by Carolyn Sullivan at 8:02 AM No comments:

Carolyn Sullivan
Cincinnati, Ohio, United States
I live in Cincinnati, Ohio. I've been quilting since I was in my 20's. It is my passion,as well as breastfeeding was, not only my own, but teaching and promoting it was/is quilting is fullfilling my time. I retired this in2012 and hope to get a lot more quilting done!